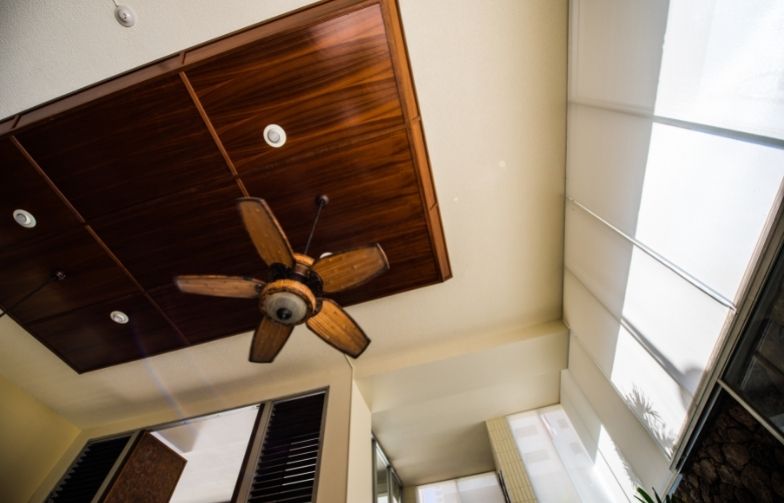 Can’t decide what ceiling fan is right for your bedroom? Are you looking for a service to repair your ceiling fan, or are you looking to install a new one? Want to know what is wrong with your fan? Or maybe you want a ceiling fan that complements your home decor? Ceiling fans are an affordable and effective way to cool down your home or office during the warmer months of the year.

The only problem is that there are so many different types and styles of ceiling fans available on the market today, which makes choosing one for your home very difficult. Also, many people don’t have experience installing ceiling fans, so they’re worried about hiring someone who doesn’t know what they’re doing. What if it falls? Will I get electrocuted? What if I mess up my new paint job?

With PEC Electrical, you can choose from our wide selection of fans and have them installed by one of our professional technicians at an affordable price. We offer free estimates on all installations, so you know exactly what you’ll be paying before we start work. Our team is also fully licensed and insured, so that you will never need to worry about any safety issues or getting ripped off by a shady contractor!

Repairing & servicing a ceiling fan is not a DIY project. And if you try to do it yourself, it can be dangerous, especially if you have no experience with electrical work.

Don’t risk your safety or the quality of your fan installation by doing it yourself! Let our licensed electricians handle this for you. We offer safe, fast service at an affordable price—we even guarantee that our work will pass inspection!

PEC electrical provides the following repairs and services in Mandurah and its surrounding suburbs: Meadow Springs, Madora Bay. Halls Head, Erskine, Coodanup… and many others.

PEC electrical electricians are trained to repair different kinds of ceiling fans. Our company can repair and troubleshoot some of the following ceiling fan issues:-

If you’re looking for a ceiling fan, but don’t know where to start, then you’ve come to the right place. Hiring an unlicensed or inexperienced person to work on your home’s electrical system is risky. It could cost you thousands of dollars in repairs down the road.

We can help you choose the perfect ceiling fan for your home or business. Our team of experts will give you unbiased advice on what’s best for your needs and budget. We have experience of installing ceiling fans for over ten years. Our friendly technicians are trained and perform the ceiling fan installation as per the AS/NZS 3000:2018 standard.

We are proud to be one of Mandurah’s leading suppliers of ceiling fans and accessories, including remote control and light kits from top brands. Our technicians will consult with you to ensure your new ceiling fan works perfectly with your home’s existing circuit, wiring and lighting fixtures. Moreover, they will also check whether your home’s existing wiring meets current compliance standards or not.

For more information about our services or to request a quote, please contact us at 0417 838 275 or info@pecelectrical.com.au!

PEC Electrical offers high-quality electrical services at competitive prices, along with outstanding customer service and support for all our products and services. Contact Us at 0417 838 275 or request a service online.

Can I install a ceiling fan myself?

The installation of ceiling fans does not seem too difficult, but you can not do it yourself without an electrical license. After all, electricity can be hazardous without proper knowledge and training in that area; even something as simple as having trouble with connections could lead to big problems like an electric shock or fire hazards.

Choosing a professional for your ceiling fan installation is a good idea for the following reasons:

Many homeowners can not install one because of a lack of knowledge or the tools needed. Calling a professional and qualified electrician is the best way to have all their wiring needs met and installation appropriately done without any worries.

When you attempt to carry out this task on your own, there are several risks involved:

Make sure everything you install falls within the regulations for building work.

One of the downsides to living in a managed residential building is that you may not be able to add or change fixtures. This means if your ceiling fan needs to be replaced, then it’s best for an electrician with permits and ID cards to replace it–not just anyone who has access.

Experts can handle the task quickly and safely.

At the end of their installation, your new fan will be a part of you, and with it comes peace of mind. You can count on professionals to provide guarantees that they’ll fix any issues for free if something goes wrong.

They are cost-effective in the long run.

Installing a ceiling fan incorrectly or incompletely may lead to extensive damage and require costly repairs. Professionals can help minimise the risk of this happening by ensuring that your home’s existing circuit is compatible with what you want in terms of light, noise level, cooling effect etc.

What are the different issues with ceiling fans and signs for repair?

The ceiling fan needs to be repaired if one of the following signs is present:-

Ceiling fan wobbling is a common problem, and there are three main reasons for it. Your ceiling fan may be of poor quality or installed incorrectly, leading to wobbles due to bending and losing connections; these can occur with the blade brackets, box screws, down rod, etc. The other reason might just be that your fan blades have become damaged over time, but whatever the cause, you should repair them as soon as possible because this condition worsens quickly, so don’t let things go too long before getting help!

While most ceiling fans make some kind of noise, a loud sound from your fan is an obvious sign that something isn’t working properly. The source of the problem could be due to loose connections in either your light fixture or ceiling box, which can rattle together when rotated by the blades and create a ringing-type sound. A noisy fan may also have worn out bearings on its blade shafts; it’s essential for these parts, along with all other moving components inside the unit, to always stay lubricated so they don’t grind against one another as you’re using them.

If your fan only operates at one speed, it could be that the bearings inside are gummed up or dry. Another possibility is a defective motor overheating and the capacitor failing to power the blades enough to rotate as they should at all speeds available.

The ceiling fan isn’t turning on.

A tripped circuit breaker might be the cause of your ceiling fan not turning on or of it not working altogether. If this isn’t the problem and you want a more thorough diagnosis, find out if there are any internal damages, like shot ball bearings needing replacement or an overheated motor that needs cooling down with water, so they don’t get too hot. Again, next time, contact us!

The flickering of light

The light fixture on the ceiling fan often flickers, but this may be because the bulb has blown and requires replacement. This isn’t always the sole cause-it’s also possible to have loose connections either to the socket or the fixture. Voltage fluctuations can also cause problems when you are using your appliances. For example, if your ceiling lights begin flickering after you turn on your juicer, it may just be due to some flaw in another appliance, like a malfunctioning air conditioner.

How much does it cost to install a ceiling fan?

The ceiling fan installation services typically range from $150-$300, excluding taxes, per fan, and this does not include the cost of the ceiling fan. The cost of a ceiling fan in Mandurah and its surroundings ranges between $100 and $600.

But before installing one of these fans for yourself, be sure to plan out its location so that way there are no obstructions or other problems later down the line when mounting it up high! Any additional costs will be discussed with you before starting work if your installation is more complicated.

What ceiling fan size do I need?

There are many fans that come in different sizes. The fan’s size depends on the room’s dimensions, but it might be challenging to choose which one fits best with your surroundings. With so much variety available for purchase these days, there should never be a shortage! Most living and dining rooms will benefit from 52 “and 56” fans, while bedrooms will help from 48 “and 52” fans. The size of the fan will have to be adjusted according to the room size.

Why is my ceiling fan so noisy?

Several noises are indicative of a potential fan problem, such as:

Is it OK to leave ceiling fans on all the time?

Ceiling fans don’t cool the air around them. They keep a room cooler by circulating and cooling it with their breeze effect. Using an electric fan can create a chilling wind when you have your AC on, making your home more comfortable than ever. Though they are energy efficient, ceiling fans contribute to high utility bills–so be sure to turn them off before leaving your home.

We called PEC to fix our electric oven and install some power points & ceiling fan. PEC were prompt and efficient & excellent quality work. Would recommend and use again.

Very professional. Appreciate a courtesy call to say what time they were coming. Very thorough and completed job quickly. Will happily use again

Very quick, professional, and friendly service. Will absolutely use again for all electrical issues I have. Cannot recommend them enough.

Cameron and his apprentice did a great job, very pleasant and professional, and reasonable prices compared to some other quotes for the same work. Props for coming out on a Sunday too.

Call us. All areas

PEC Electrical is a family owned and operated business that service Mandurah and surrounding areas.